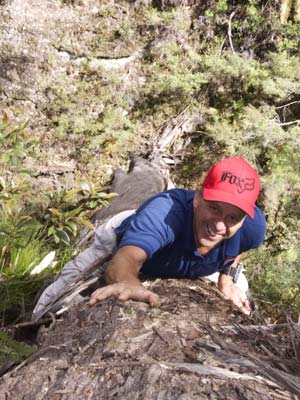 In 2005 while researching place name origins for incorporation into my text, ‘Day Walks in Therabulat Country’, I came across a name on the Jenolan topographic map, that appeared to be way out of context with either Early European settlement or Aboriginal culture. The name was Cronje Mountain. Having exhausted my then network, including luminaries such as Wilf Hilder, I was referred to the NSW Geographical Names Board (GNB) as a possible source of information.

I had no idea how to interact with such an entity, so my initial approach was by way of letter addressed to the GNB office in Bathurst. In reply I received a telephone call from a young lady. She explained that she was Secretary to the Board and following receipt of my letter, she had undertaken a study of the place name files relating to the map in question without a great deal of success. She suggested that it could be useful for me to have a discussion with a cartographer named Brian Fox who worked for the Department of Lands in the same building. She went on to say that Mr Fox had produced a Geographical Dictionary of Place Names in the Blue Mountains. I was impressed.

I recall she then offered to transfer my call so I could speak to Mr. Fox . Mr. Fox proved not to be your ordinary public servant or merely a very talented cartographer. He was exceptional in that his love of history that made him want to know the how, when where and why each place name came to be known and subsequently appeared on (or was removed from) topographic maps.

We had a great conversation. During it Brian, we very soon got to a first names basis, asked me whether I had a copy of Bernard O’Reilly’s book, ‘Cullenbenbong and Green Mountains.’ Yes, I did. He said the full and fascinating story of how Cronje Mountain got its name is within the book.

I do not know whether it was the mutual discovery that we both loved the bush, nature, history and walking or whether I kept on finding reasons to ring Brian Fox for information or what the mechanism was, however soon after we arranged to meet and go on a walk together.

Brian, I quickly discovered is an elite athlete . During the 2000 Olympic Games he was selected to run with the Olympic torch through Bathurst. His athletic credentials extend to a number of sports and his agility and surefootedness are legendary. He soon joined The Bush Club and participated in John Cooper’s series of walks ‘doing the Passes of Narrow Neck.’ A significant difference between Brian and the rest of us was his determination to do the Passes without ropes or abseils. He wanted to prove that a Pass should be capable of negotiation without using any aids.

About this time I indicated to John Cooper that this series of walks was so inspirational that I would write a book to document his Passes project. I spoke to Brian about my idea. He embraced it immediately and very quickly we were working together to produce the most comprehensive treatise that we could. Through our combined networks we contacted people with all kinds of skills and knowledge. The book ‘The Passes of Narrow Neck’ has become the recognised text on the subject.

With this success under our belts, I shared with Brian my intention to produce a book on the Upper Grose Valley to complement my very first book on the Lower Grose. Brian jumped at the opportunity to apply his energy and vast knowledge of Blue Mountains Place names and their history to this task. In addition we wanted to go further and speak to descendents of bushwalkers, entrepreneurs and others who shaped the policies, politics and conservation of the Grose Valley. The result was a blockbuster book, ‘The Upper Grose Valley – Bushwalkers Business.”

As this project was going to press, I held out another proposal for consideration, a multi volume series on the little known Gardens of Stone National Park. This was a project several sizes of magnitude greater than the Upper Grose Valley in every respect. It started out as a tentative three volume work but quickly expanded so that when complete it will be the largest body of work on an individual national park in Australia. Books 1,2 and 3 are already in the market place and book 4 is at layout stage. The remaining books are at a very advanced stage.

In 2011 Brian took early retirement so he could devote more time to our projects and his family, although not necessarily in equal proportions. Brian and I have many ideas for the future documenting of Bushwalking in The Greater Blue Mountains National Park. We work well together both in the field and in complementing each others skills.