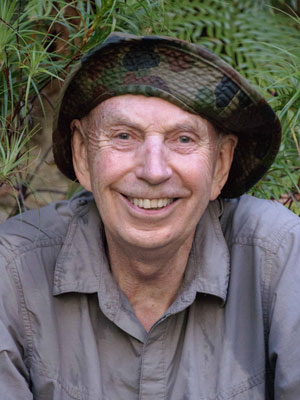 When I was growing up at Balmoral during WWII, the beaches and headlands provided a diversity of experiences, walking, climbing, swimming as well as opportunities to observe and question the natural world, rocks, plants, insects, reptiles and sea life.

Holidays were times of great experiences – whether it was the hills around Camden, the underground marvels of Jenolan Caves, or exploring the New England Ranges. My dad was a ‘shutter bug.’ There was nothing he liked more than to capture a dew drop on a rose petal, a bird in flight or a luminous fungus in the dead of night. It was unremarkable to be in what others regarded as outlandish places – we went where the spirit of adventure called.

Coming to bushwalking at a time in life when the cares of commerce are over, I made bushwalking my de facto occupation. At least twice a week I make forays into the wilder parts of the Greater Blue Mountains National Parks and sometimes more often. Abseiling, pack walking and canyoning add to the diversity of places I visit and the experiences I enjoy. A compulsive chronicler I document each walk experience systematically, compiling relevant maps and annotating photographs. When I am not in the bush, my time is split between desk and library research.

In 2011, a singular honour was bestowed upon me. I was made a Life Member of The Bush Club Inc., “In recognition of Long and Loyal Service to the Club as a Leader of Walks and an Adventurous Member during many years of continuous membership.”

Our family includes my devoted wife Jenny, and two married sons, and one amazing grand daughter.

In 2016 Michael was honoured with the Medal (OAM) in the General Division of the Order of Australia for services to bushwalking and as an author.